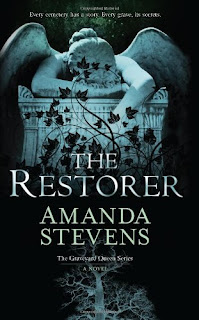 From Goodreads: My name is Amelia Gray. I’m a cemetery restorer who sees ghosts. In order to protect myself from the parasitic nature of the dead, I’ve always held fast to the rules passed down from my father. But now a haunted police detective has entered my world and everything is changing, including the rules that have always kept me safe.


It started with the discovery of a young woman’s brutalized body in an old Charleston graveyard I’ve been hired to restore. The clues to the killer—and to his other victims—lie in the headstone symbolism that only I can interpret. Devlin needs my help, but his ghosts shadow his every move, feeding off his warmth, sustaining their presence with his energy. To warn him would be to invite them into my life. I’ve vowed to keep my distance, but the pull of his magnetism grows ever stronger even as the symbols lead me closer to the killer and to the gossamer veil that separates this world from the next.

What I Loved: Amelia is my kind of leading lady. It might be my love of history that drew me to The Restorer but it was the amount of research that Amanda Stevens did that kept me interested. Amelia is a graveyard restorer that happens to be able to see ghosts. She takes her job very seriously and it is amazing how much detail Amanda put into this book. I found all the references to grave markings, burial rituals/rites, and work that it takes to restore old graveyards to be fascinating. They also tied in very well to the story and thriller arc.

What I Liked: I enjoyed the interaction and mingling of the players in this book. They each brought something to the table and I was pretty much caught off guard by each of them at one time or another. I am not going to spoil anything, so let me just say that you will be completely engrossed in trying to figure out what is happening and how it is happening.

Complaints: Devlin! I could just never connect to this character so I had a hard time feeling the pull to him that Amelia did.

Why I gave it a 4.: I felt the story was both strong and compelling. I also really liked Amelia and felt she was a strong lead for a series. I wish I could have connected to some of the other characters more but they may change as the series progresses. This was a very strong 1rst book in series.

Who I would recommend it too: See my note above because I think people from UF, Thrillers, and Horror novels will like the book. I also think some people from all those genres won’t. I do know who I will be recommending it too in my offline life.

The Abandoned (sort of pre-quel)
The Restorer