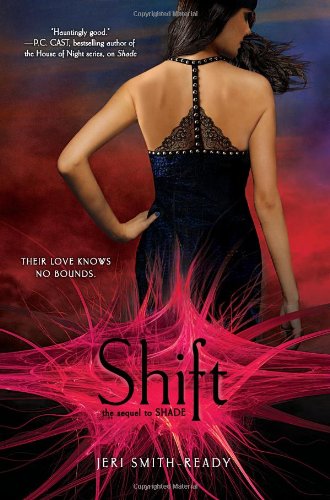 From Goodreads: Aura’s life is anything but easy. Her boyfriend, Logan, died, and his slides between ghost and shade have left her reeling. Aura knows he needs her now more than ever. She loves Logan, but she can’t deny her connection with the totally supportive, totally gorgeous Zachary. And she’s not sure that she wants to.

Logan and Zachary will fight to be the one by her side, but Aura needs them both to uncover the mystery of her past—the mystery of the Shift.

As Aura’s search uncovers new truths, she must decide whom to trust with her secrets…and her heart.

Teen Angst: There was quite a bit more but by the end a lot of it had been worked out…

Note: I think people who read YA novels regularly will give Shift a 4.5 or 5. As an occasional YA reader the angst was a little bit to much for me though it does have it’s place. Please keep that mind while reading my review.

What I Loved: The story, plot, and pacing was beyond fantastic. I am really interested in Shine (the next book in the series) and what is going to happen now that so many things have been tied up. This story really did wrap up a lot of plot lines and opened up so many more. The best thing, it was not at all frustrating instead it was much more intriguing and well thought out. The action in the last 1/4 of the story was fast-paced and twisty-turvy. While I was never sure where it was going, I was not disappointed when the story ended.

What I Liked: The characters in Shift/Shade are all very likable and well rounded. I really appreciated the fact that they had varied interests in music, education, and learning more about their world. The parents/guardians were also a major part of the story and something I think is missing in most YA. This brought believability and credibility to the storyline.

Complaints: Just the angst surrounding Prom but that will not bother most readers

Audio Specific Review: Khristine Hvam did a fantastic job on pacing, voices, and emotions. The only voice I was disappointed in was Logans but I got used to it by the end.

Why I gave it a 3.75: This was a fantastic addition to this series. While I had some minor issues with angst, the story/plot/pacing was very well done. I recommend this series to YA and non-YA Paranormal Readers.

from the Readers Playlist for Shade/Shift
See More Songs: http://www.jerismithready.com/books/shade/music/