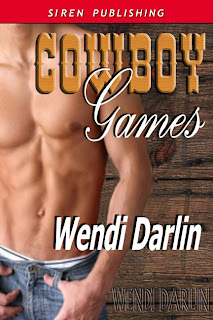 The Players:
Gavin Carter. Gavin owns Fantasy Ranch, a resort where guests get a week of cowboy love with the hottest cowboys in Wyoming.

Rebecca Ryder. Rebecca’s husband had promised to deliver her fantasy du jour: A cowboy. He died before he could keep that promise. She thinks if she plays the Fantasy Ranch game, just for a second she might have her husband back. And maybe that will be long enough to say goodbye.

Clause number two is accompanied by a clear warning: Any attempt at contact will be considered ‘criminal stalking’ and treated as such. A sure sign the cowboys are very good at making women think they have fallen in love.

Rebecca doesn’t expect to break the rules. Or to fall deeply in love.

What I Loved: Both main character in this book: Gavin and Rebecca! Rebecca had so many qualities, fears, feelings, and actions that I believe many women have.  She was in a time of transition and her story was just so well told.  Gavin read like a real guy, that you could meet, fall in love with, and yes fantasize about when you aren’t around him.  I like that he had issues he had to work through too.  It kind made the balance between them good to read.  Oh and the story was chalk full of plenty of hot steamy scenes that make you warm all over!

What I Liked: I really liked the subplot in the story.  I think it showed that no matter where you are in life, if you want to change you can.  I also liked Garrett–he was a little overprotective but that is how a brother is supposed to be 🙂

Complaints: I really had none!